At Ruhlman Eilers Construction, our expertise and precision on each job allows us to operate predominately on a referral basis. We'd appreciate the chance to talk to you and hear about your project needs and how we might be able to serve you.

Matt Ruhlman
Matt Ruhlman was born in Norfolk, NE and moved to Ogallala, NE at the age of nine. He’s the 8th child out of nine children in his family. Matt graduated high school in Ogallala in 1981 and attended the University of Nebraska, graduating in 1986 with a Bachelor of Science in Animal Science. Matt’s still an active member of Sigma Phi Epsilon fraternity as an alumni overseeing the facility. Matt worked his way through college as a remodeler, as well as a member of the Army National Guard from 1983-1989. Matt married his wife Debbie in 1989 and they have two boys, Nic and Luke and a grand daughter Olivia that lives in Fort Collins, CO. Matt and his family are practicing Catholics and active with St. Mary’s church in Denton. Matt’s currently on the Parish Council as well as the Knights of Columbus. 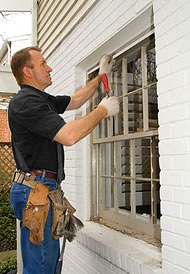 Our focus and specialty has been window and door installation, but our expertise had expanded over the years. Please take a look at what we can offer your project. Ruhlman Eilers Construction can address a specific remodel project for your home or business or conduct a more comprehensive project plan and implementation, based on your needs. Please contact us to learn more about our services and how we can best assist your next building project.